Sedgwick Hall is a milestone – started in 1910, the members of the Society of Jesus who founded the University had to wait until 1914 to complete the project. Despite that initial delay, the building has stood tall ever since. Its use over the years reflects its status as both a milestone and a workhorse, serving as a residence for Jesuits, for students, as both classroom space and recreational space, and until 2015 when Arrupe Hall opened, as the site of approximately 45% of the University’s undergraduate contact hours (and for many years Rockhurst High School as well). As needs evolved, so did the physical makeup of the building, like chapters in a book. 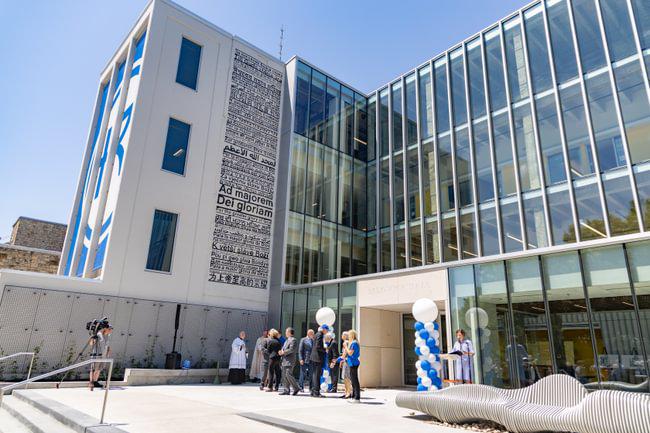 On Friday, June 3rd, Sedgwick’s newest chapter began, with a ribbon cutting for a $23 million renovation and a new life as the new home of Saint Luke’s College of Nursing and Health Sciences, which became part of Rockhurst in 2019. Inside is 55,000 square feet of space, with classrooms, faculty and staff offices, an interfaith meditation room, conference rooms, common areas and the state-of-the-art Blessed Seelos Simulation Center, where students in the health sciences — which includes nursing as well as physical and occupational therapy — can take part in immersive patient care situations in different settings, all directed discretely by evaluators. Alongside those big changes were efforts to incorporate pieces from the existing building, such as reusing travertine tile and keeping parts of the limestone façade remain visible on the inside, a reminder of the thousands of students, faculty and staff who have walked through the halls for more than a century. The result blends the past and the future, said Mary Mooney Burns, vice president of advancement.

“Here we are today with this beautiful building that has brand new features while still maintaining many of the original features and the historic charm,” she said.

Construction on the building began in December 2020 as the centerpiece of the $55 million For the Greater campaign. Designed by Helix Architecture and Design, the renovation preserved 90% of the building’s original structure. It’s not just about historic preservation — that approach shows a commitment to sustainability in the project, said the Rev. Thomas B. Curran, S.J., university president, that wasn’t always easy. He told the story of the trees that grew in front of the building that over the years had caused some damage to its foundation as they competed for resources — water and space. The architects and engineers for the project designed a solution that would give the trees what they need without affecting the building. That story — plus features such as the exterior AMDG mural, with the Jesuit motto “ad majorem Dei gloriam” written in the most commonly spoken languages in the Kansas City area, and a “cura personalis,” or “care for the whole person” core value reflection site in its courtyard — point to a building created to inspire healing and the pursuit of justice. 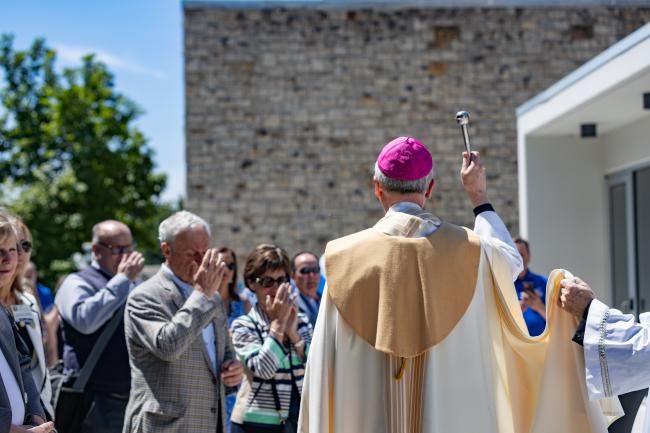 In the heart of Kansas City since 1910, Rockhurst University is dedicated to learning, leadership and service in the Jesuit tradition, and today is the #1 Regional University in Kansas City (2021 U.S. News and World Report).

Rockhurst University’s online programs are delivered by the highly reputable Saint Luke’s ™ College of Nursing and Health Sciences and the School of Education. As an educational leader serving exceptional students in the field of health care and education, we are committed to preparing the workforce of tomorrow with our unique programs designed to prepare graduates to meet the needs of diverse populations and work in various organizations.

Download your guide to learn more about this program, including:

Challenge Yourself | Inspire Others | Impact Our World

To proceed with either the BSN to MSN FNP or the BSN to DNP FNP, you are required to have a bachelor’s degree and hold your RN license.